There’s real depth to the work of an Italian artist who used layered canvases pierced with holes to create a startling hybrid between painting and sculpture. Alastair Smart explores his sudden popularity

There were just 10 years between Paolo Scheggi’s first solo show, at Florence’s Galleria Vigna Nuova in 1961, and his death from a congenital heart disease, aged 30.

He achieved a great deal of success in his brief career, representing Italy at the 1966 Venice Biennale, for example; featuring in group exhibitions around the world; designing a fashion studio in Milan for leading couturier Germana Marucelli; even founding an arts and culture magazine (Il Malinteso) that counted Jean-Paul Sartre among its contributors.

It’s only in the past few years, however, that Scheggi’s reputation has really taken off. A catalogue raisonné was published in 2015, edited by Luca Massimo Barbero, associate curator of the Peggy Guggenheim Collection in Venice. That same year, a big solo show was dedicated to him at the Robilant + Voena gallery in London.

“
Scheggi’s great gift was to create pieces of nagging beauty from what, essentially, were three blank canvases
”

One of the reasons cited for this recent popularity is that he’s benefitting from having been a disciple of Lucio Fontana. Known mostly for his monochrome canvases with knife-slashes in them, Fontana is hugely lucrative and fashionable these days. That has doubtless had a positive effect on Scheggi, an artist 40 years his junior, with whom he shared both an artistic outlook and a city, Milan.

By piercing and puncturing his surfaces, Fontana radically revised the concept of the picture plane, adding a new (third) dimension to painting as people knew it.

Following that lead, Scheggi created works – known as Intersuperfici (or, in English, “Intersurfaces”) – consisting of three canvases stacked on top of one another, each with openings cut in slightly different places to create a sense of receding space. In early examples, such openings tended to be elliptical in shape, while later on they were generally circular.

The result was a startling hybrid between painting and sculpture, labelled pitture oggetti (or “picture-objects”) by the contemporary critic Gillo Dorfles in 1966. Above and beyond any label, though, the effect was compelling; the apertures allowed an intricate play of light and shade, eclipse and partial eclipse.

Officially, these works were monochrome, Scheggi always opting for a trio of canvases of the same colour – yet the variety of the shadows belied that description.

One striking example is Per Una Situazione, for which the artist applied red acrylic to three superimposed canvases with cut-out organic shapes. The work forms part of Intesa Sanpaolo’s magnificent collection of modern and contemporary Italian art – and also features in 101/900, a recent publication cataloguing 101 of the bank’s best works from the 20th century. 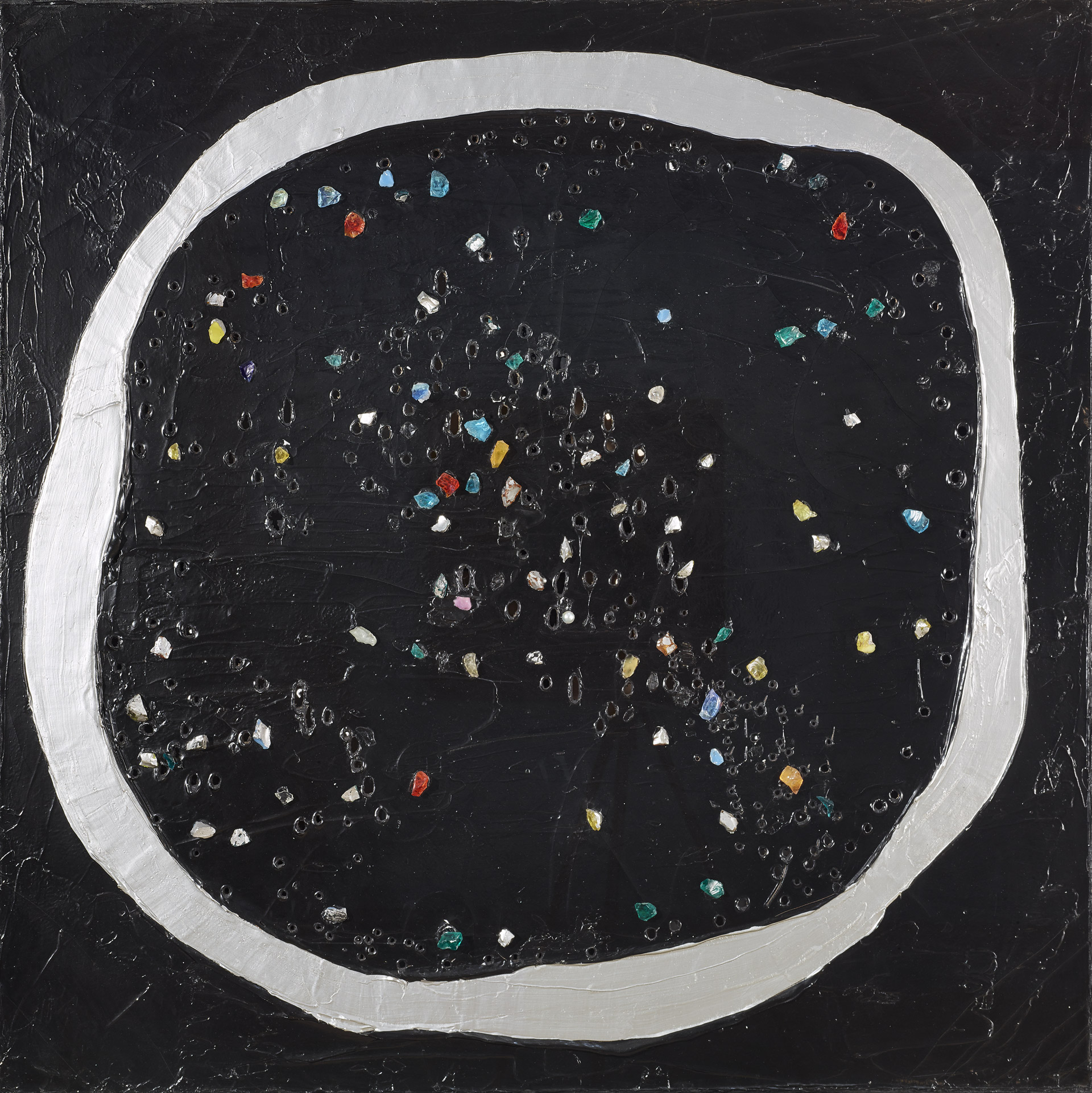 In contrast to the masters of the Italian Renaissance – who’d transformed art by creating an illusionistic sense of depth through figurative painting – Scheggi incorporated real depth into his works. Works that were entirely abstract. In a way, one might see them as a thumbing of the nose to his illustrious forebears.

To most eyes, though, the Intersuperfici were more about the present than the past. Fontana hailed Scheggi as “a man of his time”. The latter’s works in white were sometimes compared to lunar landscapes – the first photos of the far side of the moon, with its mass of craters, being sent back by the space probe Ranger 7 in July 1964.

None of this gets us close to explaining why Scheggi is suddenly so popular now, though – almost 40 years after his death. In part, it can be put down to the fact that Italian post-War art – by Fontana chiefly, but pretty much across the board – has seen a jump in prices. International collectors seem to have realised that this critically important market was commercially untapped.

It’s also worth remembering that for several years – according to the first draft of art history – the Fifties and Sixties were all about what went on in the United States. Then the Abstract Expressionist and Pop artists reigned supreme.

Nowadays, however, understanding of that period is much richer and more global, meaning non-American artists are belatedly finding recognition. In Scheggi’s case, there’s an appreciation that he helped take traditional painting to unprecedented places after the Second World War.

He was loosely affiliated, for example, with the Europe-wide Zero movement, a group of avant-garde artists to whom a major 2014 exhibition at the Guggenheim Museum in New York was dedicated.

It helps, too, that because of his premature death, the supply of paintings by Scheggi – around 300 – is relatively small (which duly boosts prices); and that his art is somewhat reminiscent of movements we’re already familiar with, such as Op art. With their neat optical effects, Scheggis might well be seen as – or mistaken for – proto-examples of that genre.

A final key factor is that his works look like they could have been made yesterday. Which is to say their cool, monochromatic restraint complements perfectly the white-walled art galleries and minimalist modern homes of the 21st century. Scheggi’s great gift was to create pieces of nagging beauty from what, essentially, were three blank canvases.