A celebration of Raphael’s genius

After Raphael – 1520-2020 at the State Hermitage Museum in St Petersburg, with Intesa Sanpaolo and Banca Intesa as exhibition sponsors, features works by Poussin, Ingres and many more, inspired by the master from Urbino

When the artist Raffaello Sanzio died on Good Friday 1520, aged 37, Pope Leo X was inconsolable. In little more than a decade, the former – better known to us today as Raphael – had transformed the Vatican Palace with an array of stunning frescoes. And they were only a fraction of his achievements.

Shortly after his death, Rome was struck by earth tremors. Heaven, it was said, wished to repeat for Raphael one of the signs given at the death of Christ.

In his brief life, the genius from Urbino had earned himself a huge reputation. After Raphael – 1520-2020, an exhibition at St Petersburg’s State Hermitage Museum, shows that his influence on artists in the half-millennium since has been massive, too.

“He produced perfectly balanced works that mark a peak and summary of the whole Renaissance,” says exhibition curator Dr Vasily Mikhailovich Uspensky. “With his extraordinary sense of harmony, Raphael became an embodiment of the ideal.

“He was probably most influential on 17th-century artists of a classical style – the likes of Annibale Carracci, Guido Reni, Domenichino and Poussin – but it’s fair to say that almost no major European artist from the 16th to the early-19th century evaded his influence. He was a point of reference for all.”

The exhibition – sponsored by Intesa Sanpaolo and the group’s Russian subsidiary Banca Intesa – features 300 works. It begins with a small selection of paintings and drawings by the Renaissance master himself – these, in Uspensky’s words, “set the tone” for what follows.

"He produced perfectly balanced works that mark a peak and summary of the whole Renaissance. With his extraordinary sense of harmony, Raphael became an embodiment of the ideal"

Highlights include images of the Holy Family by Poussin and Pompeo Batoni and images of the Madonna by Ingres and the Mannerist Jacopo da Pontormo. Also included is Friedrich Overbeck’s great oil painting, The Triumph of Religion in the Arts (1829-40), inspired by Raphael’s Disputa fresco in the Vatican and cited as evidence of his influence on German Romanticism.

The vast majority of the pieces are from the Hermitage’s own collection, but there are loans from international institutions, too, including the British Museum in London, the State Tretyakov Gallery in Moscow and the Albertina Museum in Vienna.

“Probably the biggest discovery for visitors will be eight grand frescoes from the [now-demolished] Villa Stati-Mattei in Rome,” says Uspensky. “These were created by [Raphael’s principal pupil] Giulio Romano, along with other artists from Raphael’s workshop, in around 1520. The main characters are Venus and Cupid, with love as the main theme. After crude overpainting in the 19th century, the Hermitage’s conservators have recently managed to clean the frescoes so as to display them in their original magnificence.”

Picasso was a huge fan of Raphael. “He is sheer heaven,” the Spaniard said of him. In the main, however, 20th-century artists rejected Raphael as a bit too polished and perfect. 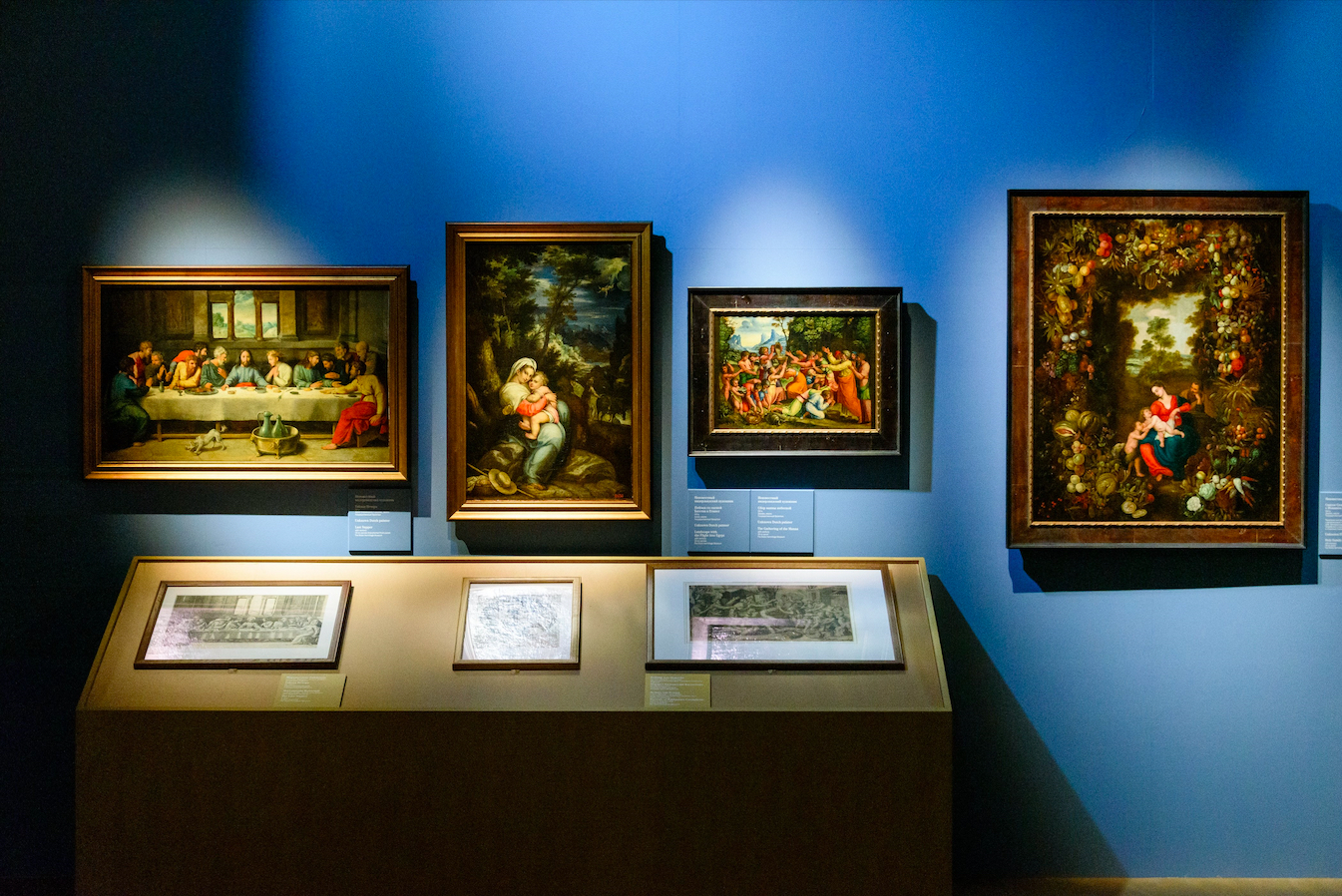 Interestingly, the exhibition features a piece created just last year by Russia’s Egor Ostrov: a reworking of Raphael’s masterpiece The Sistine Madonna, using raster (bitmap) graphics. The implication is that, in the 21st century, the Renaissance master is inspiring artists once more.

After Raphael – 1520-2020 is staged as part of a three-year cultural partnership, signed in 2018, between the State Hermitage Museum and Intesa Sanpaolo, Italy’s biggest bank, through the Gallerie d’Italia, the bank’s trio of museums, located in Milan, Naples and Vicenza. It follows an exhibition on Piero della Francesca at the same venue, which opened in 2018 and was also sponsored by Intesa Sanpaolo.

The State Hermitage Museum has provided numerous loans to shows at the Gallerie d’Italia, including one on the 19th-century sculptors Antonio Canova and Bertel Thorvaldsen, which opened in Milan in 2019.

“Intesa Sanpaolo’s sponsorship is very important,” says Uspensky. “Especially now, in a time of economic uncertainty, political tensions and the challenges brought about by the pandemic. It helps for the cultural world to stay united across borders.

“By supporting exhibitions of Italian art at the Hermitage – as well as other cultural initiatives in Russia – Intesa Sanpaolo builds an image of Italy as a generous and open country with a rich heritage.”

"We sponsor this exhibition very proudly, an initiative that reinforces the bond between Gallerie d’Italia and the prestigious Russian museum"

Uspensky’s words are echoed by Michele Coppola, Intesa Sanpaolo’s Executive Director of Art, Culture and Historic Heritage. “Raphael’s paintings and drawings count among the highest expressions of Italian art,” he says. “His influence has been felt across the world, and this fits perfectly with Intesa Sanpaolo’s strong international vocation.

“We sponsor this exhibition very proudly, an initiative that reinforces the bond between Gallerie d’Italia and the prestigious Russian museum. Advancing knowledge of master painters is a key element of Progetto Cultura, Intesa Sanpaolo’s three-year plan for promoting cultural richness as a lever for growth on a societal level to accompany that on an economic level.”

The State Hermitage is a most appropriate venue for a Raphael exhibition – in part because the museum has rich holdings of his work. Its founder, Catherine the Great, was such a fervent admirer of the Italian that she commissioned a set of artists to meticulously recreate his Loggia corridor in the Vatican Palace. Visitors to the State Hermitage today can still walk along it.

As well as myriad artists over the past 500 years, Raphael could count on an Empress of Russia among his devotees.

You can watch a video about the exhibition by clicking here